Lori appears in The 2018 Meg movie where she is portrayed by the Australian Actress Jessica McNamee.

In the film, unlike in the book, Lori is never referred to by name but instead only as Jonas Taylor's "Ex".

She, Toshi and The Wall were tasked by the Chinese underwater research facility Mana One to explore the very depth of the Mariana Trench in a submarine. They peered through the layer of hydrogen sulfide that covers it, and the trio were amazed at the species that inhabit the previously undiscovered realm. However, their amazement and joy are short lived. They soon lose

communication with Dr. Zhang back at Mana One. Dr. Zhang and his daughter Suyin Zhang recruit Jonas Taylor to embark on a rescue mission using high-tech underwater vehicles.

Since the vessel is damaged and the Rover is disabled, The Trio attempted to reroute the Systems. Lori witnesses on the sonar that something very large is approaching the submarine. That very large thing is a Megalodon, which collides with the submarine. The Trio are thrown around the interior of the submarine by the tremendous impact. After a while, the Megalodon leaves for now and the submarine and its contents regain stability. As Lori picks herself up, she discovers that a screwdriver has been driven into her stomach.

Lori trying to get up, finding a screwdriver stuck deep in her stomach.

Lauri feeling the pain and tries to remove it.

The Wall putting pressure to her wound. 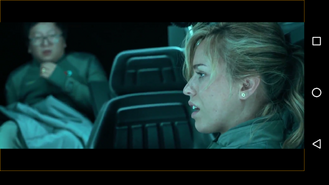 Lori sat down and told them to turn off the lights.

Because of the severe wound in her belly, Lori is forced to unzip her suit and tie it around her waist. The Wall uses a handkerchief to keep pressure on her wound, but keeps the screwdriver in her stomach.

A few minutes or hours later, Jonas Taylor arrived at the vessel and breaks through the hatch to rescue the Trio. After noticing the screwdriver stuck in his ex-wife's belly, he briefly jokes with Lori before pulling her up to safety.

Lori and The Wall make it into Jonas' vessel, but Toshi voluntarily stays behind and sacrifices himself in an unsuccessful attempt to kill the Megalodon as it charges the disabled submarine again. Toshi is blown up along with the submarine, while the Megalodon swims away from the exploding submarine with no apparent injuries.

Due to her injury, Lori's remains hospitalized in the medical quarters of Mana One for almost a week, and does not participate in subsequent missions to locate and destroy the Megalodon until close to the end of the movie. During this time, she is mostly bedridden and has her upper body unclothed so that her wounded belly can be cared for. Suyin's little daughter Meiying keeps Lori company as she recovers.

Community content is available under CC-BY-SA unless otherwise noted.
Advertisement